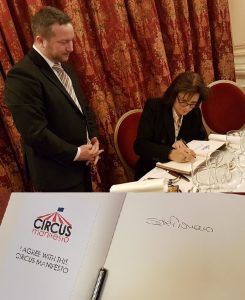 Circus art is so diverse it is impossible to define it with a single sentence. Circus has been with us since ancient times with centuries of well-documented history in the modern age as well. Beyond its obvious merits in entertainment, it has a significant intercultural, sociological, and also economic value. Circus is a lifestyle, a unique division of performing arts that is able to address and entertain all generations at the same time. During the past two centuries circus has undergone previously unprecedented development as the industry became more and more complex and colorful. While traditional circuses remained present, a new wave of traveling circuses, new generation circus productions, nostalgia circuses, stunt circuses, street art performers, thematic acrobat-shows, and contemporary and progressive circuses have become increasingly popular. Today, community and youth circuses and free-time circus schools have also become an integral part of circus arts, ensuring a well-trained new-generation of artistes and consequently the further development of circus, while providing a vital toolbox for enhanced social cohesion, job-creation, solidarity, and intercultural cooperation.
As circus developed, both institutional and legislative systems have failed to adjust the environment to the new needs and requirements of the circus industry. At the same time, some representatives of circus arts have not adapted sufficiently to the demands of this new era. The present “Circus Manifesto” gathers the needs, suggestions, current challenges and future opportunities of all European circus stakeholders including circuses, ensembles, amateurs and professionals alike, circus schools and community circuses in one document.

This Circus Manifesto was initiated by István Ujhelyi, Hungarian Member of the European Parliament and based on the ideas, comments, and speeches of this Manifesto’s supporters, and on the presentations from the conference organized by MEP Ujhelyi in the European Parliament on 18. 10. 2016. The Manifesto was presented at the 41st International Circus Festival in Monte Carlo on the 22. of January 2017.